Where to get started

Ever since I was a small boy, we had jig-saw puzzles in our home. Initially the pieces I worked with were few and big. When I grew up they had smaller pieces and some puzzles even had more than 1000 pieces.  I really enjoyed working on them, yet it helped so much to have a picture of the finished puzzle to work from.  It was very hard not to have that picture.  God’s Word is likewise in many ways a puzzle.  So, I would like to pursue that comparison.   In this context it is the mentor, catalyst, or discipler that needs to understand the overall picture of the Bible, so he or she can help the people that don’t have a picture to work from.

The first piece of the puzzle

If we start serving people who don’t know anything about the God of the Bible, then we need to start with the first piece of the puzzle.  When puzzling as a boy, I always tried to start with the corner pieces and the edge pieces or an area of the puzzle that had lots of clear details that made it easy to find pieces that belonged together… in other words, I started with something that made sense to me or that I was familiar with.  This translates in our work context to that we need to find out what we have in common with the people we are discipling.  It demands that we build relationships, get to know the people, and learn to know about their worldview.  As we learn, we can start putting pieces together and make a start.  As soon as the people whom we’re serving can become a part of putting the puzzle together, we’ll do a lot better.  After all, they need to be able to put the picture together from their perspective, since they are the ones that know their own culture and worldview.  In this way, details can fall amazingly easy into place. Then it naturally progresses from things that the people know from their own worldview.  Like in a puzzle, one keeps connecting a new piece to another piece that is already a part of the larger picture.  Over time one will see the basic concept of the picture come together and the view will become clearer and clearer.  Some details will only enhance the picture and in context of the Bible these are the things that help us to grow beyond the basic foundations of our faith.  Only when the whole puzzle is completed or in other words the counsel of God is completed, only then is the picture complete.  Still, like with a real picture, we continue to grow as we take it in and discover details that have escaped us for years.  God’s Word in that context is so rich, that it will help us grow until the day that we meet face to face with Jesus in Heaven. 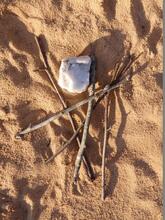 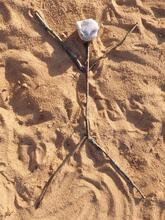 that give a simple but clear overview of God and His Word. I started under 'site assumptions' with the example of five sticks and a stone randomly put on the ground.  This didn’t have any meaning until I ordered the sticks and stone. Once it looked like a stick person, everybody identified it as such and nobody doubted.  There were not enough details to tell if it represented a man or woman, an old or young person, or what ethnicity it was.  It was a basic but clear picture and this is the same principle we should follow when we tell people about God and the Bible.  They need to have first a basic but clear picture about who God is and get a simple overview of the Biblical narrative.  I find this often to be a real need, even if there is already an established church, since often people are more familiar with the doctrines of their church than what the Bible says.  The overview of the Biblical narrative starts with the creation, which is good and is filled with life. Then they need the story of the first two people that were created, who are choosing to know good and evil, with the consequence of being changed. It ruined their relationship with God, and now they had to face death… thus sin entered the world.  This basic picture clearly needs to show how God continually reaches out to restore that relationship, while the people respond by accepting this or rejecting this.  The consummation of this restoration we find in Jesus, offering a new life with a completion of this restoration still to come as described in Revelation.  For some people this basic picture may take less than ten stories from the Bible, while others may need more.  This is like a first cycle of helping people engage with God.  From here we can proceed to a more detailed picture.

Sometimes a beginning can be simply the chronological beginning of the Bible, because all people have stories and theories about how everything got started.  Another way is to connect through a redemptive analogy or theme that has surfaced and as such becomes a door opener.  Just plain areas of interest may be a good start.  How do we find these kinds of stories? By beginning a process of discovery with the local people. We can help with ideas. Fishermen can relate to stories about fishing, farmers about farming, but also stories about women may create interest among women, especially if the story addresses relevant issues from their own lives.  The same with children, widows, blind people, deaf people, sick people, depressed people, and the list goes on.

If one is in a situation where people already have been exposed to stories of the life of Jesus, then it may be very suitable to connect with what they understand at that point who Jesus is and what He has done.  When I was with a friend on a remote island east of Africa, my friend in a casual conversation confirmed his identity as a follower of Jesus.  This started a lively conversation.  He asked the men we sat with about who they followed.  They responded by saying that they followed the prophet Mohammed.  They volunteered telling us that they definitely did know about Jesus, to which another man enthusiastically added that it was through a movie, as he stretched out his hands and portrayed the crucifixion, showing the driving of nails into Jesus’ hands.    It was not appropriate to follow through right away, but before we departed mobile phone numbers were exchanged in a culturally appropriate fashion and proper names were confirmed.  Any consecutive encounters were opportunities to connect through this Jesus.  Even though an interest about Jesus became the door opener for these people, we still need to go back and give them a proper foundation from God’s Word to build their faith on.  Not doing so sets them up for many challenges, including syncretism and dualism.

We can also bring a generic Bible story to people that should work within their worldview, but the question is whether it will interest the people. Often we might come from the outside and look at the worldview of the people group and use a generic story for all groups. We may even give them even a whole story set that has a worldview in mind, like humanistic, Buddhist, Islam, or animistic. We must not think that such generic story sets are wrong. No, they’re wonderful if they are a good fit, but sometimes they don’t. If the sets don’t fit, by all means we shouldn’t use them, but rather find other sets or at least adapt the set as needed.

Often there are physical needs in the lives of the people and in a holistic fashion we need to first show the love and virtues of Jesus primarily through our walk of life.  I don’t mean necessarily by giving people things, especially as a reward for being part of our programs or meetings.  This will create easily an unhealthy dependency. People will often come for the things we give them and they’ll take the message we may share only because it comes with the things they receive.  This can be one strategy, but it should be evaluated carefully, so we don't make people deaf to the message.  Of course if there is real hunger or for example a medical need, then we do need to remember the principle of reflecting God's love to meet these needs.

Sometimes people actually don’t want the help we offer. They are offended toward Christianity because they miss-understand it or simply because they sense that there are strings attached to our offer that will put pressure upon them in one way or another.  In 2004 there was an enormous earthquake that caused a major tsunami, affecting the coasts from Thailand, Indonesia, to the Maldives, India, and even parts of the eastern coast of Africa, killing more than 230,000 people.  It seemed like the whole world rallied to help and as such there was one Christian medical team that had several doctors to help the wounded.  In their situation the Muslim people did not want any Christians to help them.  They expected that these Christians would try to convert them and that was unacceptable to them.  The team did not give up and since they realized that the sanitary situation was disastrous, they just started digging holes and build latrines.  When these Muslim people saw even the doctors digging toilets, they realized that there was no hidden motive and it opened doors to start building some relationships and to provide other help.  Our hearts need to be willing to love as only Jesus can through us, without a personal agenda, regardless how well it may sound.  He knows how to draw people unto Himself and so, this may sometimes be the first piece of the puzzle. 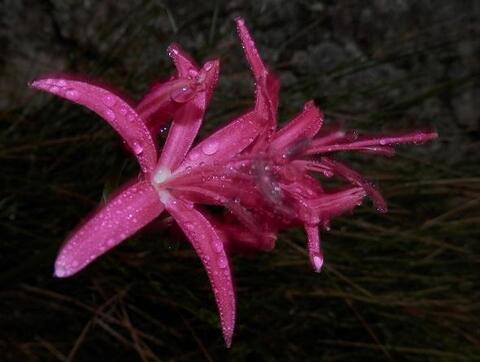